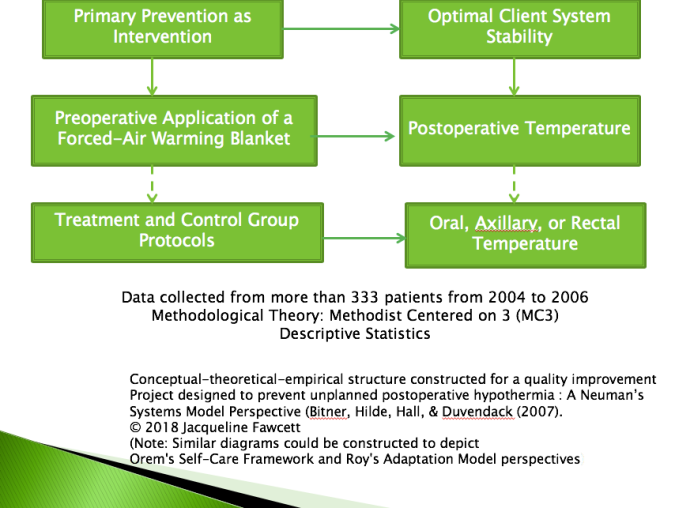 “Using the Neuman Systems Model,’ in which the patient is viewed as an open system that reacts and adapts to both internal and external stressors. . . . Nurses can minimize stressors by proactively maintaining normothermia.
According to Orem’s [Self-Care Framework], . . . the patient’s self-care deficits are the result of environmental situations . . . Patients in the perioperative environment are unable to meet or have difficulty meeting many of their own needs, By warming the patient preoperatively, the nurse assists the patient in meeting his or her physiological needs.

Roy’s Adaptation Model in which the goal of nursing is to promote patient adaptation/ views humans as biophysical adaptive systems that react to stress. Preoperative warming helps humans adapt by minimizing complications such as shivering, which can cause cardiac stress.'” (p. 922)

The methodological theory guiding conduct of the QI project was the Methodist Centered on 3 {MC3), which is based on the Plan-Do-Check-Act (PDCA) and the Define, Measure, Analyze, Improve, and Control (DMAIC) approaches. Bitner et al. (2007) explained:

“The method employed by MMCI incorporates the three steps of

. . . The MC3 model centers around solving problems, determining the root cause of problems, formulating ideas that would result in improvement, testing those improvements, maintaining the improvements, and emphasizing a rapid cycle of change.” (pp. 923-924)

“The purpose of this [quality improvement (QI)] project was to compare the postoperative temperature of patients who underwent total joint arthroplasty procedures but who did not receive any form of preoperative warming with the postoperative temperatures of patients undergoing the same procedures after the institution of a policy of warming patients with a preoperative forced-air warming blanket” (Bitner et al., 2007, p. 923).

The control group consisted of the baseline patient population treated according to current practice and who did not have forced-air warming blankets applied preoperatively. The treatment group had upper body, forced-air warming blankets applied preoperatively at a setting that would maintain patient comfort and normothermia. Both groups received the same intraoperative care. A data collection tool was used to record the relevant information (Figure 1). Data were excluded if the collection tool was not completed.” (Bitner et al., 2007, p. 923)

A special feature of this QI project was frequent feedback to the staff nurses. “Both education of staff members and reporting of data was paramount to the ongoing success of the intervention and to staff member involvement. The philosophy of MMCI is that in order to achieve rapid and sustainable positive results, data relative to the indicators must be presented and discussed frequently by those whose actions directly affect the outcome results. Too often, organizations leave these key steps out of action plans.” (Bitner et al., 2007, p. 926)

“A visual feedback tool . . . was used to educate staff members before the study was initiated. A second tool was used after implementation of the new processes” (Bitner et al., pp. 925-926)

“The overall summarized data demonstrate an improvement in patient temperatures; however, quarter three showed a decrease in the mode PACU temperature to 95.3° F (35.r C) with a mean of 97.2″ F (36.2° C). On further review of the data, it was determined that the lower patient temperatures occurred about the same time that new orthopedic surgical suites were being constructed. The construction limited the number of orthopedic Ors available for use as well as the number of rooms with precise room temperature control. Nevertheless, communication of these data and focus on the overall process of monitoring patient outcomes continued to provide staff members with the opportunity to be proactive in affecting patient outcomes. As another PI measure, in November 2005, the project team also recommended that thermal caps consistently be placed on patients to improve patent postoperative temperatures. In quarter one of 2006, data demonstrated, data demonstrated that 94% of patients arrived at
the PACU with a temperature higherthan or equal to 96.4° F (35.8° C), and 20 of 23 patients (87%) in quarter two of 20Ü6 arrived at the PACU with a temperature higher than or equal to 96.4°F(35.8° C). Staff members continued to implement patient warming interventions, even as the variable of construction
continued into 2006.” (Bitner et al., 2007, pp. 927-928)

Bitner et al. (2007) did not explicitly address the utility of any of the three conceptual models that guided the project. However, the results indicate that reducing stressors is effective in maintaining optimal client system stability (Neuman’s Systems Model), preventing or reducing self-care deficits (Orem’s Self-Care Framework), and promotion adaptation (Roy’s Adaptation Model).

They stated, “The use of the [Methodist Centered on 3 {MC3) approach] to establish procedures to improve patients’ postoperative temperatures demonstrated that changing clinical practice in an organization is a dynamic process that requires data, feedback, and revision. Clinical evidence alone is not enough to implement a new practice. Using a PI mechanism can allow clinicians to validate data, compare results to the hypothesis, and determine how best to apply new techniques to everyday practice. It should be noted that the implementation of preoperative warming measures created a change in practice for nurses as well as anesthesia care providers and surgeons. It took time for this change to become regular practice for perioperative staff members. An additional valid consideration is the possibility that implementing a preoperative forced-air warming blanket program might require an increase in an organization’s capital budget for the purchase of additional forced-air warming blankets. This intervention, however, improved patient’s postoperative core temperatures and potentially reduced the incidence of hypothermia-related complications.” (Bitner et al., p. 928)

Bitner et al. have been cited in these other publications: