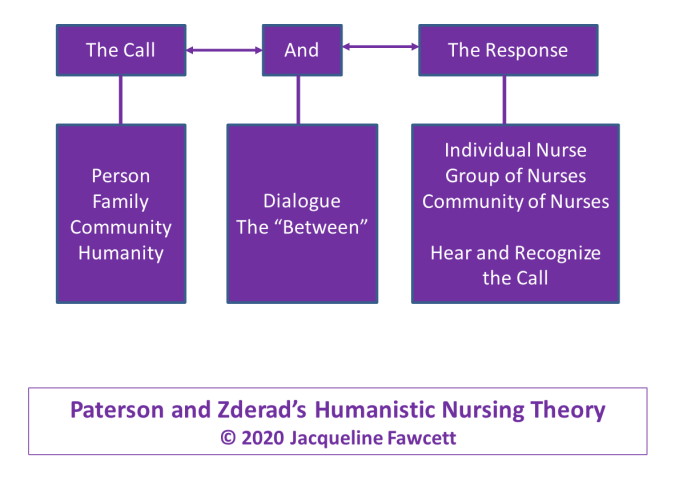 The process of practicing humanistic nursing theory involves “offers nurses a way to illuminate the values and meanings central to their lived experiences so that they may share them with other nurses and integrate them into their nursing practice … [which] helps nurses to realize their self-actualizing potential” (Kleiman, 2010, p. 338). Practice is a phenomenological process of reflection focusing on “synthesis and wholeness rather than reduction and logical analysis” (Kleiman, 2010, p. 339).

More specifically, humanistic nursing practice asserts that clinical practice is predicated on the existential experiences of the nurse that are deliberately and consciously constructed” and focuses on change, as well as being and becoming (Wolf & Bailey, 2013, p. 62),

According to Kleiman (2010), “Humanistic Nursing Theory emerged from Patterson’s and Zderad’s search for a way to make things better for nurse and their patients as they engaged in the daily activities of nursing practice” (p. 338). .
“Paterson and Zderad’s Humanistic Nursing Theory applies both Humanism and Existentialism to nursing theory. Humanism attempts to take a broader perspective of the individual’s potential and tries to understand each individual from the context of their own personal experiences. Existentialism is a philosophical approach to understanding life. It’s the belief that thinking begins with the human – the feeling, acting, living individual. Existentialism emphasizes the individual’s free-choice, self-determination and self-responsibility. Retrieved from https://humanisticnursing.weebly.com/the-theory.html

Wolf and Bailey (2013) provided this definition of humanism and humanistic: “Humans are valued as unique individuals; human beings have a responsibility toward each other. Acknowledgement of the individual with respect toward personal experience person-centered perspective that emphasized growth and respect for persons, a feature that resonates between patient and caregivers” (p. 64).

Humanistic nursing theory encompasses a call from a person or persons (families, communities, humanity) for help with a health-related need, and a response to that call when recognized by a nurse or groups or communities of nurses. Through dialogue, nurse(s) and person(s) work toward resolving a health-related need (Kleiman, 2010). More specifically, nursing “is the ability to struggle with another through ‘peak experiences related to health and suffering in which the participants are and become in accordance with their human potential’” (Paterson and Zderad as cited in Kleiman, 2010, p. 339). Nursing is a nurturing activity for persons in need toward well-being (Kleiman, 2010).

Dr. Josephine Paterson is originally from the east coast and Dr. Loretta Zderad is from the mid-west. They both were graduates of diploma schools and 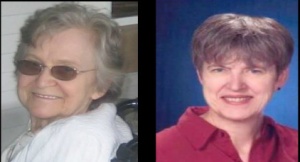 subsequently earned their bachelor’s degree in Nursing Education. Dr. Paterson did her graduate work at Johns Hopkins and Dr. Zderad did hers at Catholic University. In the mid-fifties they were both employed at The Catholic University and were assigned the task of working together to create a new program that would encompass the community health component and the psychiatric component of the graduate program. Subsequently they developed a collaboration and dialogue and friendship that have lasted for almost 40 years.
Josephine Paterson and Loretta Zderad retired in 1985 and moved South where they are currently enjoying life. Although they are no longer active, they are pleased at the on going interest in their theory. (from http://libguides.twu.edu/c.php?g=270174&p=1803689)