Note:  we are delighted to introduce a new Nursology.net series featuring notable works exploring concepts and issues that are related to the development of nursing knowledge. As this series evolves, you can see the posts in the series “Notable Works” under the main menu “Series/Collections”

In 1988, Janet Allan and Beverly Hall, both prominent nursology scholars and leaders

in the discipline, published an article titled “Challenging the focus on technology: A critique of the medical model in a changing health care system.” Drawing on a rich body of literature from nursing and other disciplines, and their own insights as nursing scholars, they called on nurses to examine and challenge the dominant model that derives from a model that views the body as a machine, one that needs to be “fixed” if something goes awry, and the process of disease as an evil force to be obliterated.  They called for nurses to question the reification of

this model, and to engage in dialogue to explore alternatives that are derived more directly from the values and goals of nursing. In particular, they pointed to the lack of established efficacy of the model (despite claims to the contrary), the serious unaddressed ethical and iatrogenic questions the model engenders, the harmful effects on health and well-being that derive from the model, and the economic consequences (Allan & Hall, 1988).

In 1996, Hall specifically addressed the challenges of medicalization in undermining nursing approaches to chronic mental illness. In her critique, she discussed the ways in which the disease framework of chronic mental illness creates barriers to understanding the person as a person, and creates an unequal power structure that draws attention away from the personhood of the patient and their experience. Stated succinctly, Hall noted: “Nursing, in its attempt to be scientific, has embraced objective theories and diagnostic schemes that are devoid of practical reasoning that has as its inherent focus humanistic values, personal meanings, and subjective language” (Hall, 1996, p. 24).

In 2003, Hall published another remarkable work that represented a departure from the purely “scientific” approach to show what can emerge from an approach that uses practical reasoning, humanistic values, personal meanings and subjective language in exploring what is recognized as the focus of the discipline of nursing- the human response, the human experience.  In this moving essay Hall draws on her own experience of having a life threatening diagnosis of breast cancer, reflecting on the effects of medicalization on her experience.  As she summarized in the abstract, these effects were “(a) giving useless treatments to keep the patient under medical care; (b) demeaning and undermining efforts at self-determination and self-care; and (c) keeping the patient’s life suspended by continual reminders that death is just around the corner, and that all time and energy left must be devoted to ferreting out and killing the disease” (Hall, 2003, p, 53).

Hall’s essay prompted three nurse scholars/practitioners, each with different experiences related to diagnosis and treatment in the current health care system, to respond to Hall’s call for ongoing dialogue.  Richard Cowling, Mona Shattell, and Marti Todd (2006)  added their own personal narrative to the dialogue — Richard as a person who experienced a mitral valve prolapse; Marti living through the experience of ovarian cancer, and Mona who has had very little experience as a patient, but wrote as a nurse and stated:

Naivety is not an excuse. In fact, it is what angers me most about medicalization—this overreaching power that silences me.” (Cowling, Shattell & Todd, 2006, p. 299).

Responding to Cowling, Shattell and Todd’s reflections, Hall affirmed their work, and stated: “As a reader, I feel privileged to be on an inside track with personal narrations that are conceived within such a sensitive context” (Hall,2006, p. 305).  She also observed that her own 2003 article, and in the Cowling, Shattell and Todd article, there could be a misunderstanding as to the nature of “medicalization” – that this dynamic is not about helpful or not helpful medical care.  Rather,

“medicalization is a form of organized and systemic oppression that is so culturally entrenched, powerful, and invisible, that everyone’s choices, including those practicing in the biomedical field are manipulated, and options are precluded with scant awareness on the part of any of the actors (Hall, 2006, p. 305.)

Medicalization is the exercise of a power dynamic that restricts the possibility to see any alternatives other than those prescribed by the “canon,” and that insists on excluding any other possibility.  From this frame of reference, western medicine is not the only source of “medicalization” – other forms that we sometimes call “alternatives” can be equally drawn in to the same type of power dynamic that uses the power of prescription to diminish human experience, and that destroys the possibility of an authentic human relationship that nurtures meaning and authenticity in the experience. 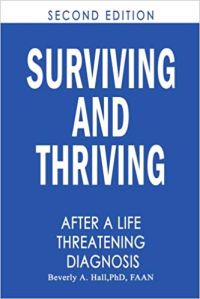 Parallel to the writing and deep thought that produced these notable articles, Hall was simultaneously engaged in her own nursing practice in the community, working with people who were experiencing life-threatening illness.  Drawing on her own experiences as a patient and as a nurse, she wrote and self-published a book that provides a glimpse into possibilities beyond the realms in which medicalization has taken hold.  The second edition of her book, published in 2008, explains three challenges of surviving and thriving after a life-threatening diagnosis – the challenge of preparing yourself mentally for surviving and thriving, the challenge of learning that help lies within you and all around you, and the challenge of focusing your attention on what your body needs to heal (Hall, 2008).  These challenges are relevant, as Bev shows, to anyone – whether they continue to live, or they move through dying.

I invite Nursology.net viewers to explore these notable works, and find ways to contribute to the ongoing dialogue that raises awareness of this dynamic, and in doing so explore pathways to shift our focus in the direction of nursing’s own perspectives.

Hall, B. A.. (2008). Surviving and thriving after a life-threatening diagnosis. AuthorHouse.  https://market.android.com/details?id=book-giE2mx62bAwC . Also available here,